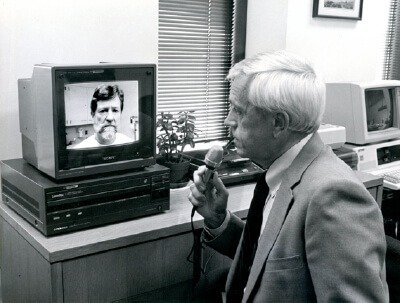 In this 1985 photograph, William G. Harless, PhD, then director of NLM’s TIME Project, interacts with the clinical simulation titled, “The Case of Frank Hall,” through voice-recognition technology.

William G. Harless, President & CEO of Interactive Drama Inc. and former National Library of Medicine employee and contractor, passed away this past May. Dr. Harless’s contributions to the NLM were many, including the creation of the first voice-activated interactive videodisc patient simulation model in the mid-1980s. As Director of NLM’s Technological Innovations in Medical Education (TIME) Project, he received the 1986 NLM Regents Award for Scholarship and an award in the category of Best Educational Application at the University of Nebraska – both for the development of voice recognition technologies. With his passing, NLM remembers a colleague and a friend.

Bill Harless held a PhD degree in psychology and learning theory. He also had held faculty positions at five major universities and the Union for Experimenting Colleges and Universities, where accredited doctorate degrees are awarded from a multidisciplinary, experientially-based curriculum. He developed the first natural language computer patient simulation model at the University of Illinois School of Medicine in Chicago in the early 1960s. Dr. Harless published over 50 articles on natural language interactive simulation as a learning strategy and was a recognized expert in the field. In 1991, he was awarded a patent for his voice-controlled video simulation model. He was awarded a second patent in 1996 for his dynamic prompting system.

Part of his legacy lives on in the NLM Visitor Center (on the first floor of NIH Building 38A, the Lister Hill Center), where the “Dialogues in Science” kiosk, featuring content and technology he created, allows guests to conduct virtual interviews with leading figures in science and technology, including current NIH Director Dr. Francis Collins, NLM Director Dr. Donald A.B. Lindberg, geneticist Dr. Joshua Lederberg, winner of the 1958 Nobel Prize for his discovery of how bacteria transfer genes, former US Surgeon General Dr. C. Everett Koop and astronaut John Glenn who, following a career in the US Senate, returned to space to participate in experiments aboard the Space Shuttle.

A memorial service for Bill Harless will be held by his family at 7:00 PM, Sunday, June 8, at the Cedar Lane Unitarian Universalist Church, 9601 Cedar Lane, Bethesda, Maryland.

All of us at the NLM join in mourning the loss of such a remarkable scientist, innovative leader, and cherished colleague.

The clinical simulation titled, “The Case of Frank Hall,” through voice-recognition technology received an award in the category of Best Educational Application at an awards ceremony at the University of Nebraska, Lincoln. Since its founding in 1836, the National Library of Medicine has played a pivotal role in translating biomedical research into practice. NLM is the world’s largest medical library, with nearly 22 million items in its collection. A leader in information innovation, it is the developer of electronic information services used by scientists, health professionals and the public around the world.

Want to join the discussion?
Feel free to contribute!

FNLM Receives Award for “Distinguished Public Service” from the...

The End of an Era: Director Lindberg Retires After 31 Years Leading NLM
Scroll to top